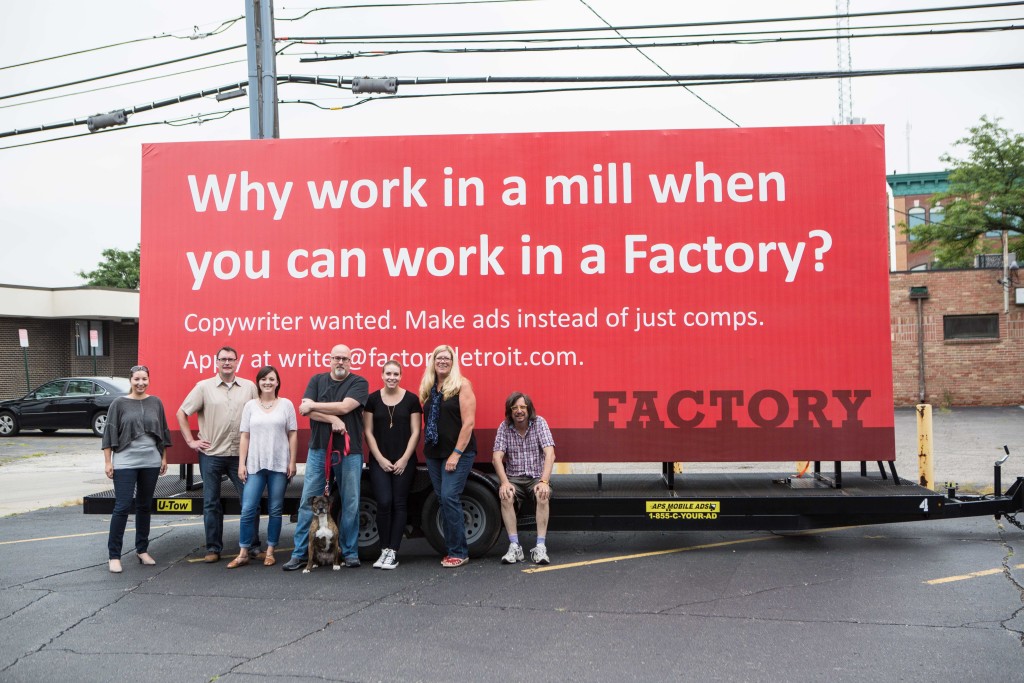 . . . was the theme here at Factory yesterday. We’re looking to hire a new copywriter and found ourselves in a “fish where the fish are” kind of mood. We put together a mobile billboard promoting the open job and had it take a day-long tour of the six big ad agencies in Detroit (or as I like to call them, TeamLeoMcCommonDonerWald).

Yes, the board (“Why work in a mill when you can work in a Factory? Copywriter wanted. Make ads instead of just comps.”) is a bit of a shot across the big agency bow. And, yes, we were trolling.

On the other hand, mostly, we were just amusing ourselves. Because every now and again at work, that’s what you have to do.

That said, most of us here have worked at big ad agencies and there’s a truth in the rolling billboard, particularly for folks who’ve worked in big agency creative departments:

When you work in a big ad agency with a big creative department and (often) lots of teams working against the same assignments . . . well, it’s easy to go long stretches without actually getting to produce the ideas you come up with.

It’s one of the most important differences between working in the big, corporate, network ad agency and its cast of hundreds (or thousands) versus working in an independent, start-up agency with its cast of tens (or ones).

When you work in a small agency like Factory, you don’t have the backstop of lots of other ad professionals working the same territory. It’s a tight team of ad folks making the TV commercials and the radio commercials and the print ads and the point-of-sale and the out-of-home and the collateral and the trinkets-and-trash and the headquarters signage and the outbound emails and the logo designs and the letterhead and the. . . .

You get the idea, I hope.

I look back over the past couple years since we launched Factory. And I’m astonished at the sheer volume of work we’ve produced. And I’m happy with the quality of it, much more often than not (there are always things that could have been better, of course).

But I’m also mindful that not everybody has the constitution and metabolism to work in an agency like ours.

Just as it’s easy to find yourself lost in the crowd of a big ad agency staff, it’s also easy to hide behind all those colleagues. I assume some folks like it. Or at least don’t mind it.

There may be comfort in taking working only as far as the meeting where it dies. After all, you still get paid.

But I like to think that the best folks – the most talented folks, the most driven folks – want their work to see more than the inside of a pizza bag or a conference room.

If you’re a big ad agency copywriter and you’re reading this, here’s what I’d like to tell you about why you should give us a shout:

If you work for an agency like Factory, you’ll do more writing and you’ll produce far more of what you write than you will at the big agency.

And, in the long run, writers get better when they write.

And ad people were meant to make ads.

So What’s Wrong With Advertising?

Let’s put aside for a minute how bad so much advertising is.  What’s really wrong with advertising, since you ask, is the cynicism that…