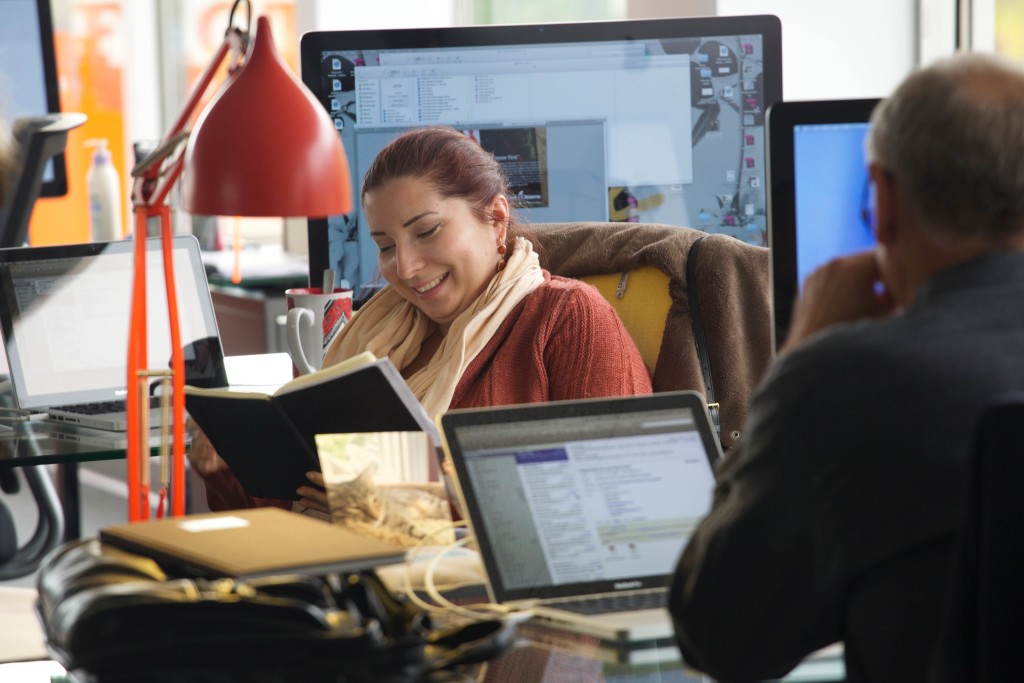 . . . Skonieczka. That last name is pronounced Skoy-nyetch-kuh. At least that’s the way I pronounce it, so it must be right. She joined the team here at Factory back in early 2014. Not quite a year after we incorporated, not quite six months after we launched our first work.

We’d posted a job on LinkedIn for an art director. And we got a lot of handraisers, some talented folks among them. But what we really needed was someone who could up our design game, think visually, understand the mechanics of the art side of the ad business, make everything we do look better, work better, stand out more.

About 10 minutes before Izabela was scheduled to come to our office for an interview, I was at my desk (doing something useful, I hope). I happened to see someone who looked to my eye like a designer crossing the street from the big three-story garage on Center in downtown Royal Oak. I said to myself something along the lines of, “I bet that’s Izabela.”

You may ask what exactly a designer looks like and I certainly couldn’t tell you. I can tell you I was right. It was she.

So she came in and we a chatted a bit. After we talked I handed her off to one of the other Factory folks to chat with in our conference room. They closed the doors and started talking.

I turned to the folks out in the work area and said, “She’s the one.”

One thing I’ve noticed since launching my own agency back in 2013, the big ad agencies in town tend to take their people for granted. It’s an artifact of the automotive meltdown of 2008 . . . and the Detroit agency meltdown that followed, with the region’s big ad agencies shedding thousands of jobs in the period of a few years. Detroit became a buyer’s market for talent and the big ad agencies pretty much stopped handing out raises.

I once heard an agency CEO admit as much. “What are they going to do,” he asked, “get new jobs?”

“Yes,” was my reply. “The talented ones will. And you’ll be stuck with the ones who can’t get new jobs.”

My point being it took only a few minutes with Ms. Skonieczka and her portfolio to understand she was massively talented. And she loves the business we’re in. She loves advertising. She loves design. She loves color and typography and shape and line and texture. She loves creating things. She loves telling a story visually. She loves working in three dimensions and creating beautiful and clever things by hand.

In the nearly two years since she joined Factory, Izabela has made a huge difference in everything we do. We are better at design than we were before she walked in the door. I mean, a world better. She works fast and thinks fast about the problems she needs to solve. She creates and creates and creates. And we are the better agency for it.

Also, by the way, she’s a wonderful person. Fun. Kind-hearted. Positive. It’s impossible not to like her.

Advertising is a business full of bullshit titles. Chief This Officer and Chief That Officer among them. Years ago, I worked at Ogilvy & Mather. My title was Partner. At least that was part of my title. And I’m here to tell you it meant absolutely nothing. I was a Partner of nothing. For a lot of agencies, Partner is a bullshit honorific they toss around because it doesn’t cost them anything.

We’re ten people strong. Two of us have been Partners. That meant we own the business entity that is Factory Detroit Incorporated. One of them is me, the other is a guy named Greg Sieck.

And now, effective the beginning of this year, there’s a third. Her name is Izabela Skonieczka.

It occurred to us a while back that Izabela had become an indispensible part of our agency: She pushes us to new places, she brings new ideas on a daily basis, she keeps a watchful eye on all our art and print production, she makes the office a more artful, more creative, more inspiring place to work.

She should be an owner, we said to ourselves. So we made her one. Greg and I gave up pieces of our equity to make that happen.

As of January 1, 2016, Factory Detroit Incorporated has three Partners. Izabela Skonieczka is one of them.

I couldn’t think of a better way for this agency to start this year.