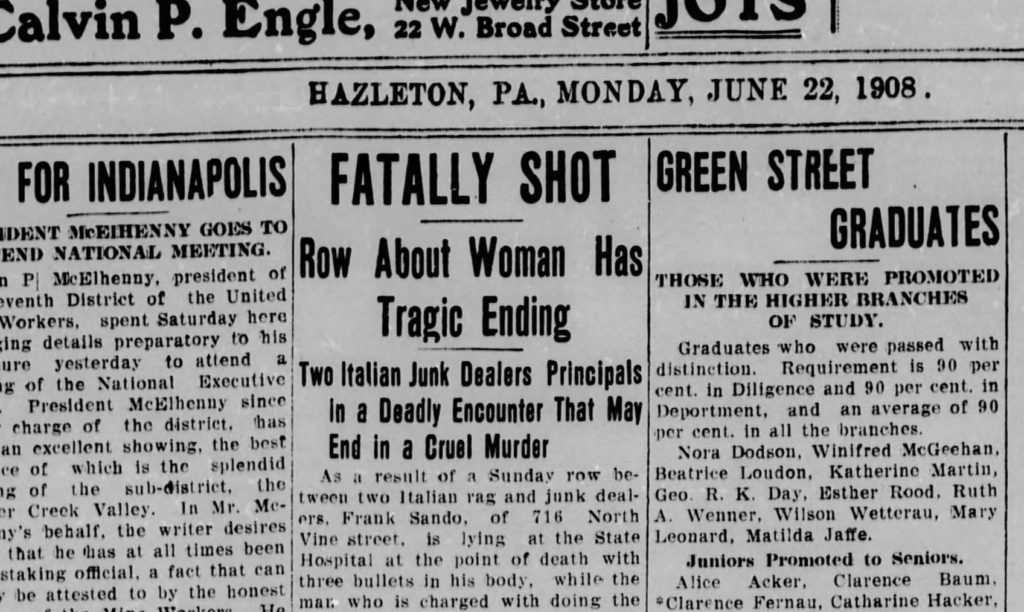 . . . by any measure of what it means to be a bad man. He was abusive to the woman in his life; he drank disadvantageously; he was violent. He was by all accounts what they used to call “no-account,” a poor, shiftless immigrant who gives a bad name to immigrants as a class.

Frank Rose no doubt did many bad things in his life. But one of them, at least, was exceptionally bad. And had consequences – bad, good and in between – that would live past him.

Frank Rose, willfully and without hesitation, took a life.

The first thing to know about Frank Rose is that Frank Rose wasn’t even his name, not really. Most of the news stories about him would refer to him as “Frank Rose, alias La Rosa.” He came over from Italy. So he was Franco La Rosa or Francesco De La Rosa or something like that.

Whatever his name, this is his story:

On Sunday, June 21, 1908, in a town called Hazleton, Pennsylvania, Frank Rose, drunk and angry, went to the home of a Frank Sando to get his wife back.

What had happened was Frank Rose had been shacked up (as they used to say) with a woman not actually his wife but kind of his wife. Frank’s wife wife had died in childbirth back in 1900. The common-law wife, if that’s what she was, had apparently tired of Frank Rose’s abusiveness, bailed on the relationship and moved into the home of Frank Sando.

Now, it’s unclear whether she moved in with Sando as a boarder, paying rent, or moved in as something else, paying something else, if you know what I mean. The news accounts differ. There was at least some speculation that Sando had left his own wife and family for her.

Either way, Frank Rose wanted his woman back.

Frank Rose then took out his knife and cut himself in the face, so he could claim self-defense, in the event he was arrested and tried, which he was. The cops got him minutes after the whole thing was done.

That was June 21. Sando didn’t die until July 29. He lingered in terrible pain for six weeks and died, turning an assault over a woman into a murder over a woman.

Frank Rose pled down to voluntary manslaughter and was sentenced to 12 years at the Eastern State Penitentiary in Philadelphia (now a tourist destination), with the expectation he’d do about eight.

And that would have been the end of the story, except for this:

While Frank Rose’s wife had died in childbirth, the child had not.

Her name was Theresa Rose. The following February, her father in the penitentiary, she was sent to the St. Joseph’s Orphan Asylum in Scranton.

Theresa Rose was my grandmother.

I just found all this out recently because I was doing the Ancestry.com thing. I learned a lot, little of it actually good, about the people who came before my brother, my sisters and me. But it has given me a lot to think about.

Being in advertising, it’s occurred to me to wonder why you don’t see stories like mine in the Ancestry advertisements.

When Ancestry launched, they had beautiful commercials, directed by Jeffrey DeChausse (who’s also directed our commercials for First Citizens Bank), touching real-life stories of people who learned more about who they were and where they came from because of Ancestry.

Then they had stupid, stupid commercials (not directed by Jeffrey) with fake stories about fake people and fake ancestors with dumb jokes, like the commercial about the bald guy who was shocked – shocked, I tell you – to discover one of his ancestors was a barber. Oh, the cosmic irony.

More recently, they’ve been doing good TV commercials again, with real people telling interesting stories about the things they learned and what it meant to them.

(The commercials for their DNA-testing product, however, leave me cold.)

Now, in the typical Ancestry commercial, people go back in time and discover something good.

On the other hand, that’s today. The Frank Rose stories (my Frank Rose story and the stories of all the other Frank Roses out there hiding in Ancestry’s databases) were a hundred years ago. It’s not “too soon.” It’s real. And it’s something worth thinking on, the way life unfolds, the stories, good and bad, left behind by those who came before us.

My first response was “wow.” The fact that my grandmother was raised in an orphanage was known to my family. As was the fact that her father was taken away and she never saw him again. But what happened to her father – and why – was lost to history. Sort of. My father never knew, at least. Apparently, there were relations who knew something about it, but being Italian on that side, they knew how to keep their mouths shut.

Afterwards, I took a more cynical view of things. Frank Rose may have been the worst of the lot, but across the four families that came together to make my family, he wasn’t the only one who drank too much, the only one with a disposition to violence, the only one who was abusive to the woman in his life.

“We come from shit,” I concluded, “and pretty much everything they touched turned to shit.”

No, that’s not exactly the right sentiment for an Ancestry.com commercial. I get it.

But more recently, my thoughts have changed again. It occurred to me that, had Frank Rose not killed Frank Sando, the circumstances that led to my being here would never have taken place. The dominoes of time would have fallen a different way.

Some who know me might say that wouldn’t be a loss; some might say it would; others yet might say, hey, them’s the breaks, fate works that way. Philosophically, I probably belong in that last group, but pragmatically speaking, I’d much rather be here than not.

It was a June afternoon in Hazleton, Pennsylvania. A life was taken. That taking pushed the Sando family one way and the Rose family another. I do wonder what other dominoes have fallen because my great grandfather, Frank Rose, was a violent asshole.

So maybe it’s the kind of thing Ancestry should do a TV commercial on: My great grandfather was a murderer and I turned out okay enough.

Certainly, for me, that was worth finding out. The few hundred dollars I’ve spent on Ancestry so far has been wisely spent – I believe – because what I’ve learned has given me much to think on.

For 199 bucks (and another 29 bucks to access Ancestry’s Newspapers.com product) I was able to find out I have a murderer in my family tree.

Actually, a second murderer. But that’s a whole other story.

Teen cancer can be a difficult topic for people to wrap their heads around. How is teen cancer different from everybody-else cancer? We put…